No Pants No Problem 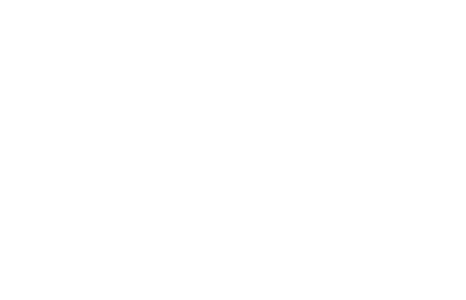 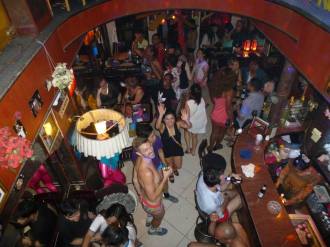 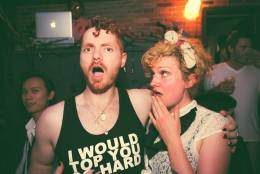 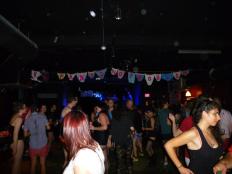 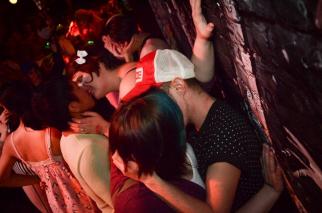 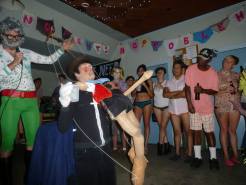 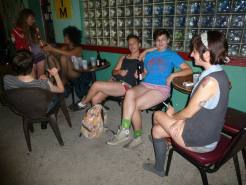 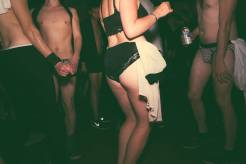 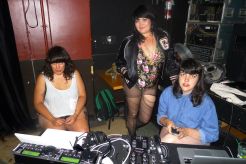 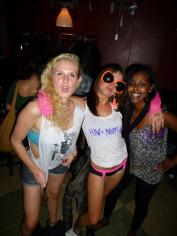 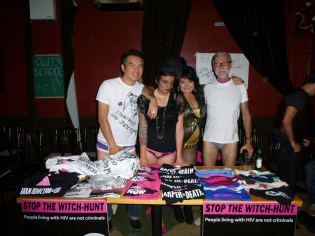 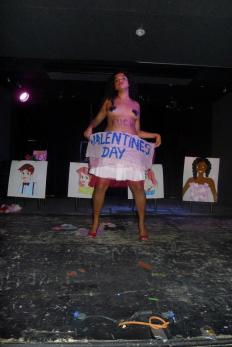 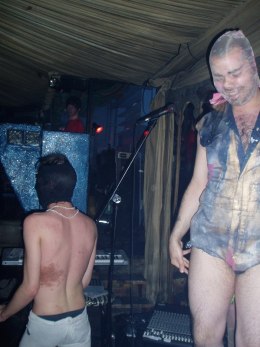 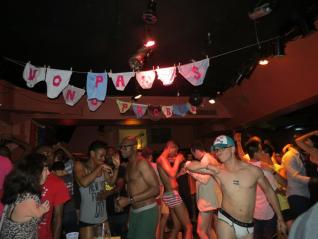 No Pants No Problem (NPNP) is a curatorial arts project, based in social relationships, and direct action, as a means to challenge binaries in gender and sexuality, phobias of all sorts, and constrictive inner and outer dialogues about bodies and desire. Set in the context of an underwear dance party, NPNP is an opportunity for open engagement, and time based, social performances. Unlike other “underwear” parties, the walls of NPNP are lined with granny craft activist banners, provocative posters, performances and other forms of messaging that remind the participants of the complexities of HIV and other personal disclosures, the criminalization of bodies, and our own sexual privilege (or lack their of). By doing this NPNP critiques public health messaging and gives space for communities to discuss risk, vulnerability and choice in ways that are realistic to everyone.

NPNP lives through the legacies that are documented in personal stories and photographs.

As a young 20 something year old, recently diagnosed with HIV, Jessica Whitbread wanted to flirt and feel good about her body the same way that she saw all of her friends having the privilege to do. Unfortunately the stress of disclosure within both straight and queer spaces was intimidating to say the least. To side step this in a way that felt good to her, Jessica began to curate commonly used party spaces in order to make it feel safe for her to interact and be her flirty self. These soon were known as the infamous Kill Him…Hide the Body Montreal parties (2004 – 2006). These sexually charged, and playful spaces were home to events such as Smooch’O’Rama, Bikini Girls with Machine Guns, Homemade Porno Party, Slutty Bingo, Jessica Festica, Better Than Betty Bake Off, Kiss-me-oke, and the Pretty Ugly Undies Contest – later to be known as No Pants No Problem. Not as altruistic as it may have appeared, these events slowly proved that they were more than just spaces for Jessica to navigate her own sexuality and body in relation to her HIV status. Over time other people start to talk about how difficult disclosure was for them as well. The first time this happened can best be captured in a quote by one of the guests:

“I kissed 25 people last night at spin the bottle…even more exciting is that I brought my friend. He is probably the straightest guy I know. He said to me….I kissed six guys last night, and one was probably the best kisser I have ever kissed in my life” – Carly Bee, 2005 – “Those parties helped me figure out a lot of things about desire and sexuality and sluttiness as fun, joyful, hilarious pursuits….I brought that spin the bottle game to conferences, summer camps and picnics.”– Carly Bee 2013.

Being the only young queer HIV positive girl in the room can be very lonely (despite sleeping with folks along the gender continuum – what gives?!), and through these events she learned to build bridges amongst others who often are excluded from the joys of sexual privilege: these included her friends who were trans, fat, questioning, trauma survivors, differently abled – the list really goes on. Although the KHHB events don’t happen anymore the legacy of these spaces lives on through NPNP. In recent years, NPNP has developed a language that merges art and activism as it creates a unique space to continue to push boundaries about how communities can be built collectively.

NPNP is a community building project and therefore we are excited to support other cities that want to host a NPNP. We are interested in working with and going on dates with other artists, community organizers, activists, do-gooders, radical queers, allies and anyone else who isn’t only out for themselves. NPNP is not interested in working with individuals and/or organizations who are trying to profit or capitalize on the NPNP space – it is more than a party! If you are interested in having NPNP come to your city – please contact Jessica Whitbread so we can work out ways of making this happen.