Space Dates is a collaborative project by Canadian queer artist-activists Jessica Whitbread and Morgan M Page/Odofemi focused on interrogating, in often hilarious and somewhat surreal ways, the intersection of the criminalization of HIV non-disclosure, the ‘safer sex industrial complex,’ and queer women’s sexualities. The project centres on the visual theme of two women in spacesuits going on cute dates and attempting to have so-safe-you-can’t-even-feel-it sex with each other.

Space Date –“Picnic” was first performed as part of a Day With(out) Art at the Art Gallery of Ontario in 2012 as an extension of the PosterVIRUS collaboration with Onya Hogan-Finaly on I DON”T NEED TO WEAR A SPACE SUIT TO FUCK YOU! 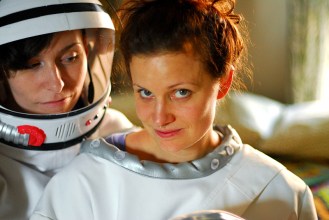 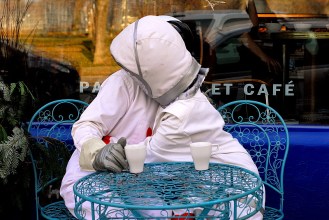 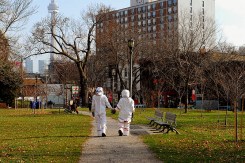 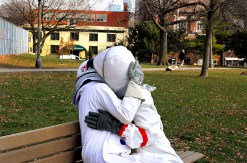 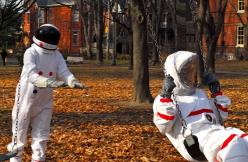 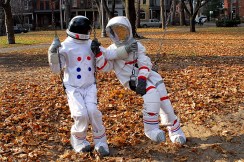 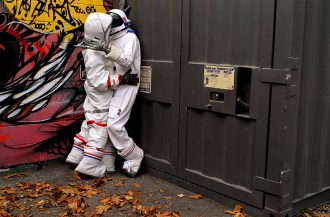 I DON’T NEED TO WEAR A SPACESUIT TO FUCK YOU

Two women in spacesuits, legs interlocked, seem to be having a romantic evening at home in their retro-futuristic feminist landscape. In the distance, Toronto and the solar system watch on, perhaps approvingly. Approving of their prescribed, so-safe-you-can’t-even-feel-it-so-why-is-this-happening sexual encounter.

This poster was originally inspired by a conversation had between activists/artists Jessica Whitbread and Morgan M Page, in which Jessica related telling a date that she “didn’t need to wear a spacesuit to fuck” them. So often we are told by safer sex educators working in the Safer Sex Industrial Complex that the only way to have sex with and/or as people living with HIV is to hermetically seal everything up under layers of latex. Failure to do so is at best irresponsible, and at worst criminal. Little, if any, room is made for a discussion about levels of risk in various kinds of sex. Nor is there talk around making your own choices about what kinds of risks you’re willing to take. Despite having the lowest risk of transmission, the queer women’s community runs rampant with ignorant cautionary tales and folklore. We are left feeling like Lindsay Lohan in Mean Girls, after her gym teacher yells, “If you have sex, you will get pregnant and die!” before passing out the condoms.

Stigma continues in the regulation of people living with HIV’s sex lives in relation to perceived promiscuity – if you’re going to have sex as and/or with someone living with HIV, you better be in a committed relationship – though not advised – as symbolized here through the dinner, roses, and champagne that Sally Ride and her date have displayed before them. . (Side note: The use of Sally Ride is particularly interesting, locating both lesbian or queer identity in the image, and recalling that her long-term partner was unable to receive benefits after her recent passing.) Heaven forbid poz people continue to enjoy the same kinds of casual sex that every other queer person feels entitled to. The stigma around promiscuity is especially damaging to women who already face considerable slut shaming in all areas of our culture simply for having any kind of sexuality at all (and, should they fail to display sexuality, face stereotyping as the frigid bitch).

LA-based artist Onya Hogan-Finlay astutely takes a singular visual idea dreamed up between Jessica and Morgan and transforms it into this delightfully retro lesbian sci-fi fantasia. Her design inspiration is taken from the work of groundbreaking lesbian feminist graphic designer Sheila Levrant deBretteville’s promo poster of the Women in Design: The Next Decade, created in 1975. 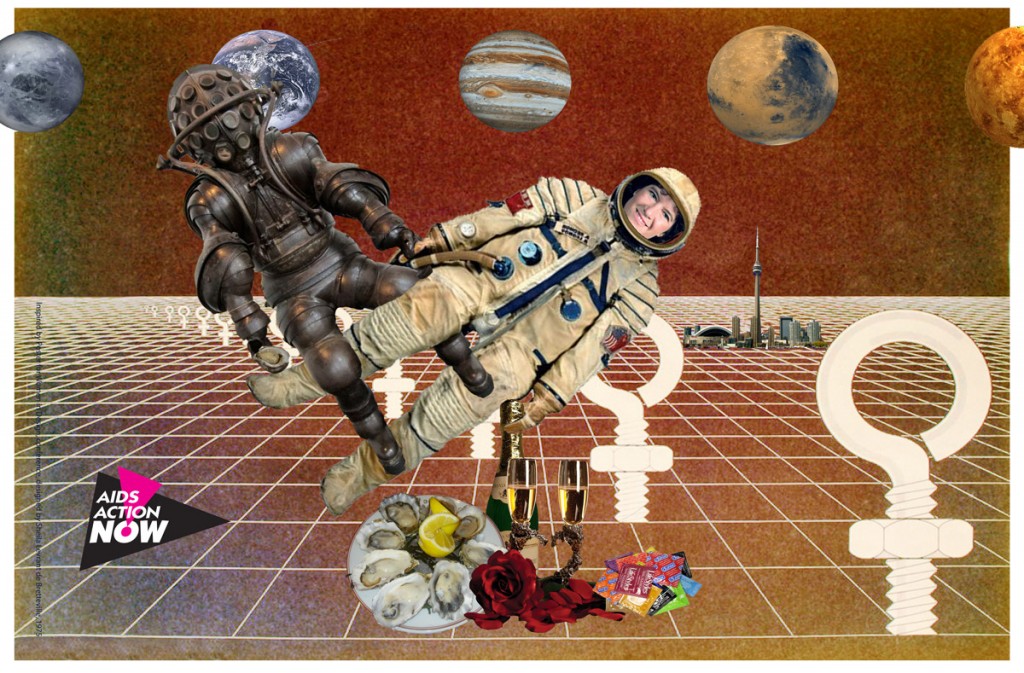 ← No Pants No Problem
Other →